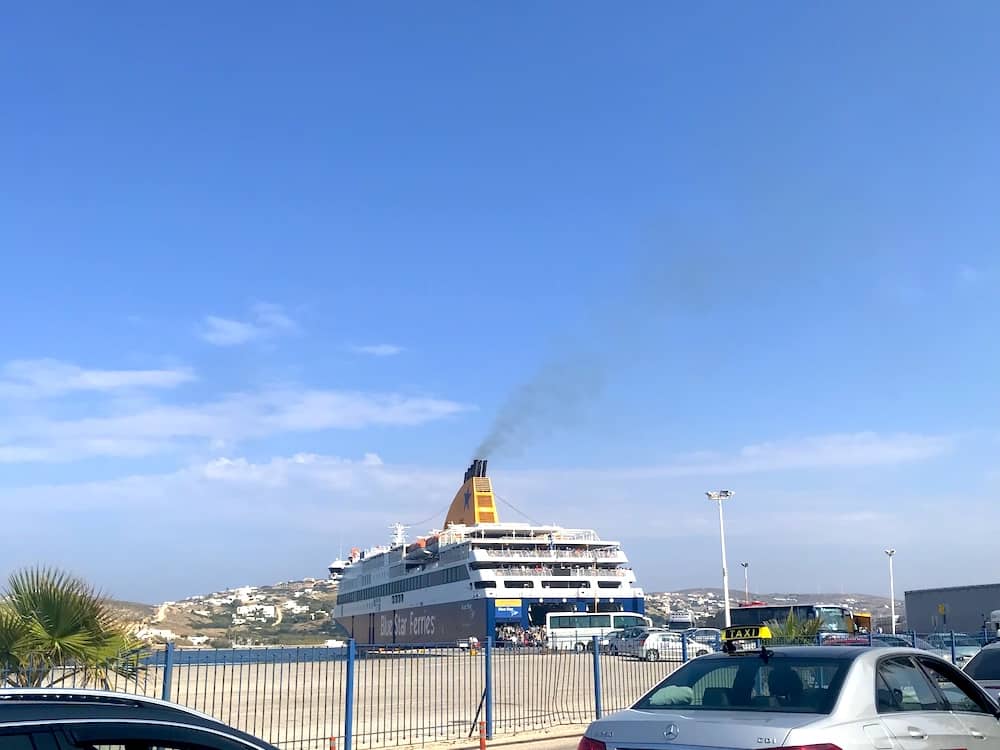 Thinking about taking the Athens to Santorini ferry?

It can be a confusing thing to navigate with all the different ferry companies to consider, the timetable, the prices and so much more.

We’re here to help clear all of that up for you!

Matthew and I absolutely love Greece. We spent our honeymoon in Greece and we have been almost every single year for the last 4 years – no joke! The culture, the people, the food and the natural beauty keeps us coming back, regularly might I add.

Taking the Athens to Santorini ferry isn’t as complicated as it seems. However, there are some things you need to consider before you go ahead and book tickets.

Here’s everything you know about taking the Athens to Santorini ferry.

How To Take The Athens To Santorini Ferry – Step By Step

Thinking about getting the Athens to Santorini ferry?

There are several ways to get from mainland Greece to the beautiful islands along the Mediterranean Sea.

You can take direct flights from Athens International Airport to Santorini which is the fastest way to get there. It only takes around 1 hour and you can get flights for as low as 20 euros (with Ryanair obviously). 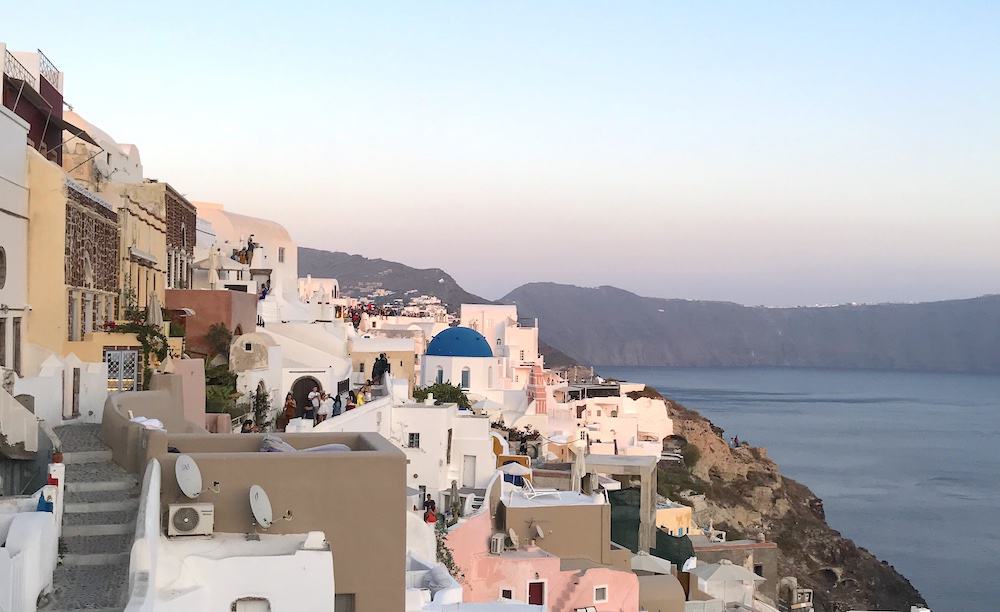 But one of the most popular ways to get from Athens to Santorini is via the ferry. Why?

The hassle of getting to the airport, going through security, waiting at the gate and flying through isn’t that fun. A ferry ride on the other hand is very exciting and adds to the experience of your Greek adventure, right?

Here’s how to take the Athens to Santorini ferry.

You have a few ferry companies to choose from when traveling across the islands in Greece. The most popular routes like Athens to Santorini have a more frequent ferry schedule than others.

Here’s the most popular ferry companies that you should look for: 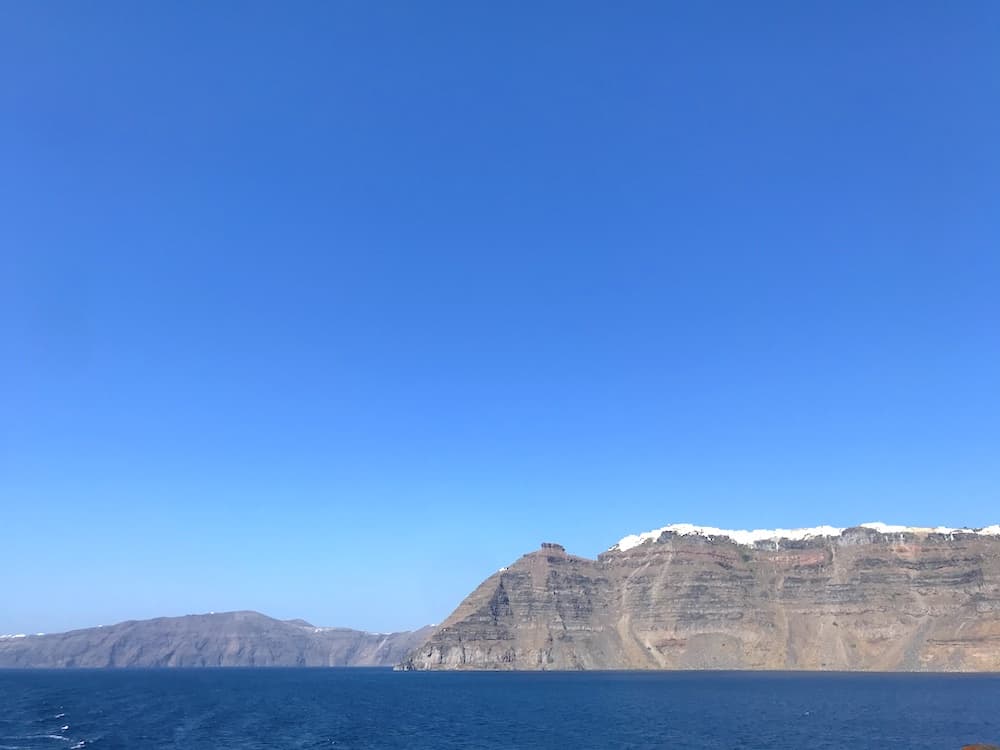 All ferry companies in Greece have their own ferry routes. Not all companies will go to the Greek islands, some will only do certain routes from island to island. This is why sometimes it’s actually better to book through third-party sites because they show all the ferry companies that serve your exact routes.

We have personally been on Blue Star Ferries and SeaJets! They are both great in their own way and both companies are the most popular options for people taking the Athens to Santorini ferry.

Which Websites To Book Your Athens To Santorini Ferry?

There are tons of third-party websites to buy your ferry tickets from Athens to Santorini. You can trust most of them, we have booked through them before and it’s worked out well for us.

You can also book directly through the ferry companies’ websites too. Just depends on what’s easier for you.

Here are the links to some third-party sites:

If you want to book directly through the ferry companies, here’s the links:

If I remember correctly, we booked the majority of our ferries on the “GreekFerries” site. This worked perfectly fine for us as we checked in at the port. For one of our ferries, I remember booking directly with Blue Star Ferries which is actually a user-friendly website.

Which Is The Best Port For The Athens To Santorini Ferry?

Trying to figure out which port to add to your search? That’s one of the questions that I had when I was booking all the ferries for us.

I’ll make it simple: From Athens to the Cyclades, the best port to depart from is Piraeus.

This is why it can be confusing – there are 2 ports you can choose to depart from in Athens. And that’s the Piraeus port and the Rafina port. 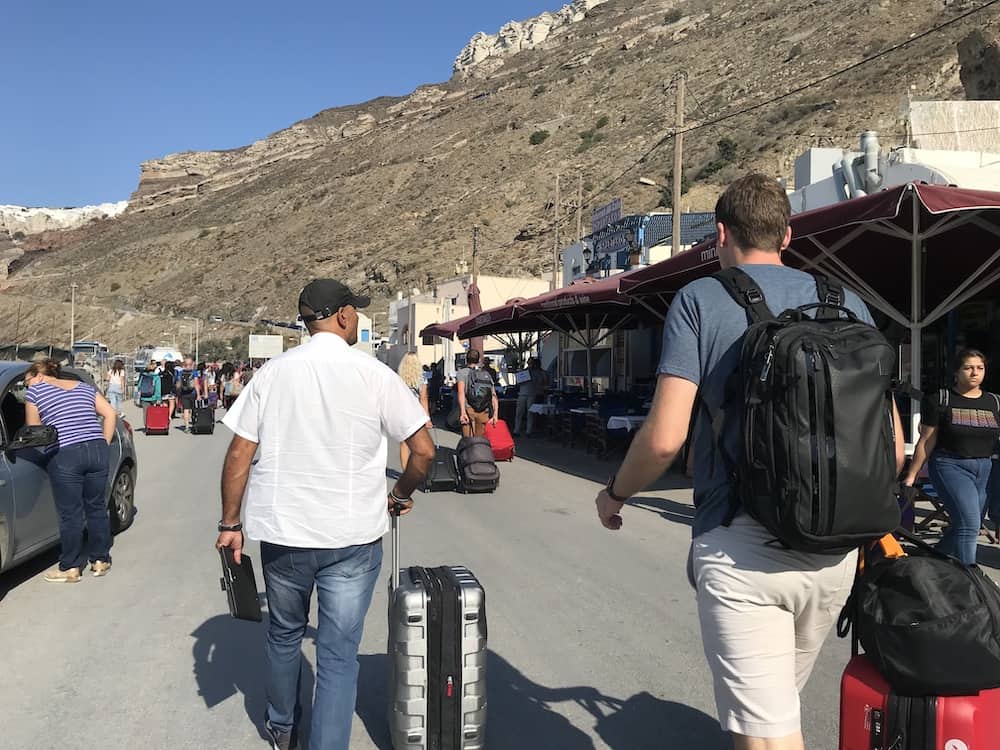 If you’re traveling to Santorini, Piraeus is the port that travels all the way to the Cyclades. It’s also much closer to the city center (around 25 minutes depending on traffic) than the Rafina port.

Is The Athens To Santorini Ferry A Direct Trip?

No. There’s not a direct trip from Athens to Santorini!

You might have to have a quick stop in nearby islands such as Ios, Naxos, Paros, Mykonos, etc. There are very quick stops as the people get off and new people get on! 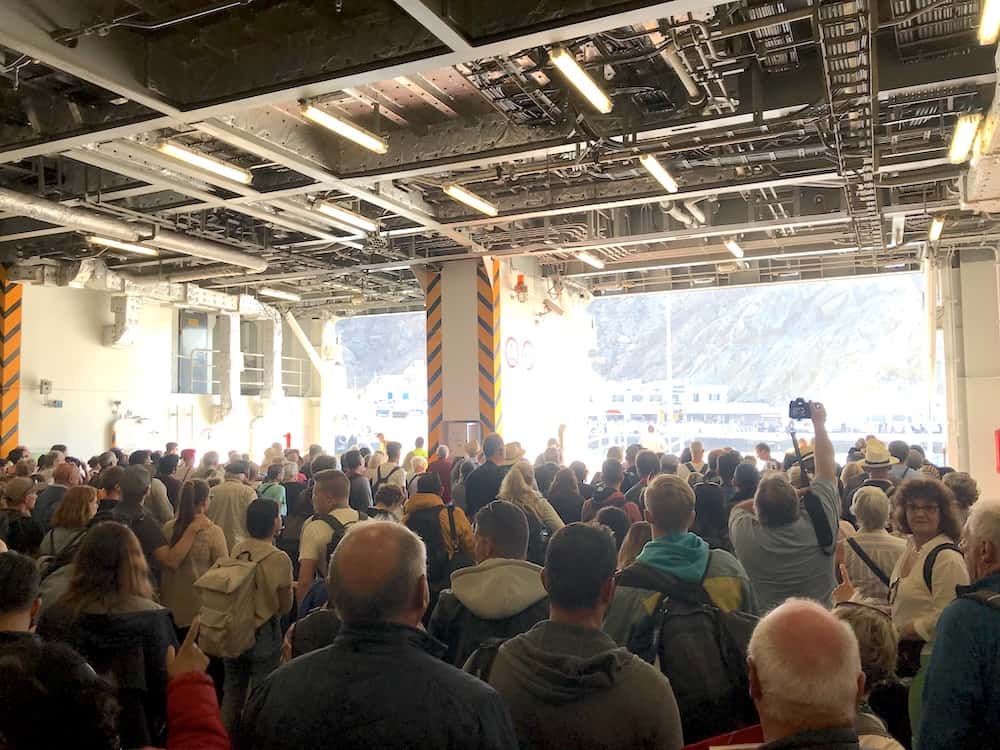 Make sure you don’t get off too early or too late! Keep an eye on your location on Google Maps or you can listen for the announcements. If it’s an unusually huge number of people getting of the boat, you’re probably in Santorini!

Traditional vs. High-Speed Ferries – Which Is Best?

Which ferry should you take – the high-speed ferries or the traditional ferries?

Well…it’s not so simple.

There are good and bad with both options for taking the Athens to Santorini ferry.

Traditional ferries are much slower. If you take the Athens to Santorini ferry, it can take anywhere from 7 to 12 hours. Yes, you read that right! If you don’t have any time to waste, the traditional ferry might not be the best option for you.

However, with great speed comes great motion. The high-speed ferries might not be the best for those that are sensitive to motion sickness! As they travel faster, they will break through the waves a little more and it may make you more nauseous than your conventional ferry.

The high-speed boats could also be worse if there are bad weather conditions. Obviously, you’d also feel that in the traditional type of ferries but it’s much less on such a huge ship compared to a smaller type of vessel.

What’s The Timetable For The Athens To Santorini Ferry?

It all depends on which company you choose!

You need to watch the timetable for the Athens to Santorini ferry because they operate at some insane hours and the last thing you want on your adventure in Greece is to arrive in Santorini at 3 am!

Here’s the timetable of the SeaJets ferry timetable. The other companies haven’t posted a timetable. It does change depending on the season, always go their websites to check the latest timetables.

You can always double-check each company’s website for the latest timetables as you book.

Which Seat Should You Book On The Athens To Santorini Ferry?

The better question is…how much are you willing to spend on your ferry rides?

Remember – you’re on this boat for 5-9 hours and that feels even longer while you’re on the ferry. Being comfortable is very much worth it if you can splash the cash! 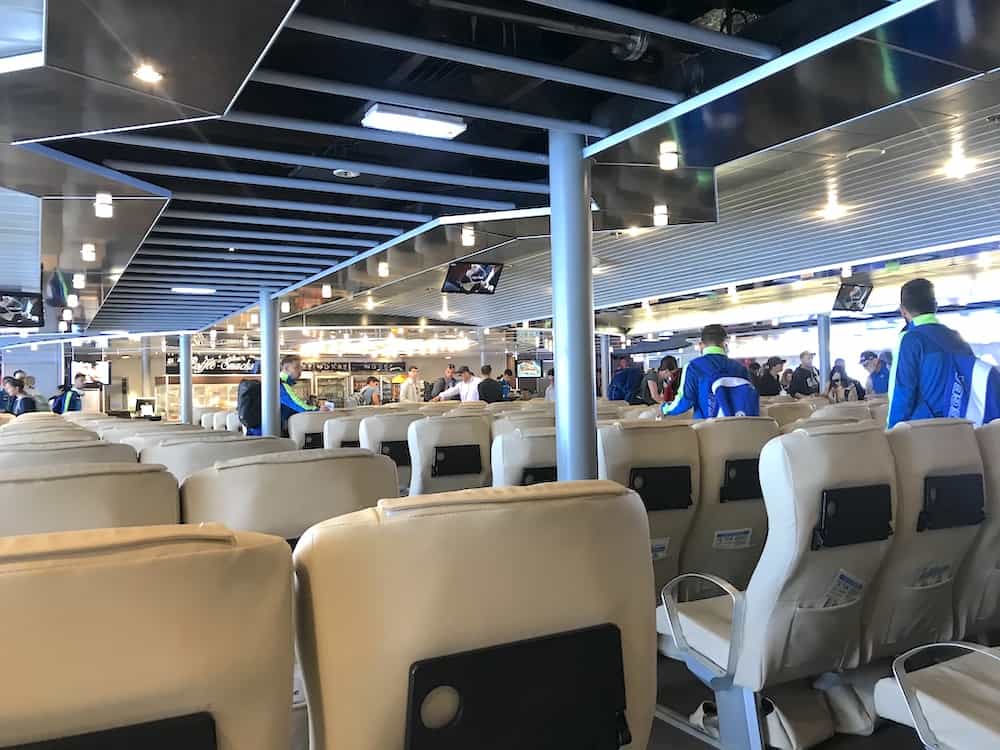 There are like ‘airplane seats’ but with a little more legroom than actual airplane seats. The economy seats do have a table that folds out for your food and drinks but it’s nothing fancy. We found people just moved around to whatever seats they liked so you could probably do the same.

The business class seats looked really nice and it was much less chaotic than the economy herd of people. The price can vary but it is usually double the cost of an economy ticket but also double the comfortability aspect.

It’s totally up to you what you choose! We went with the cheaper option and we played a little Mario Kart on Matthew’s Nintendo Switch to pass the time. If you want the luxe experience, business class seats are definitely worth the extra cost for the convenience, comfortability and fewer crowds of people!

How Much Does The Athens To Santorini Ferry Tickets Cost?

The price of the ferry tickets can vary from as little as 20 euros all the way up to 90 euros, depending on several things like:

The schedule does change pretty frequently which is why you should check regularly and book if you need peace of mind! The price only increases closer to the date and if you want the cheapest, book early.

We paid around 50 euros for our economy seats on the Blue Star Ferries. The price doesn’t always vary based on the schedule you choose so just the daytime ferries if you can. You don’t want to arrive at 2 am and paid the same as someone that arrived in the afternoon.

If it’s your first time taking the Athens to Santorini ferry, like we once were… 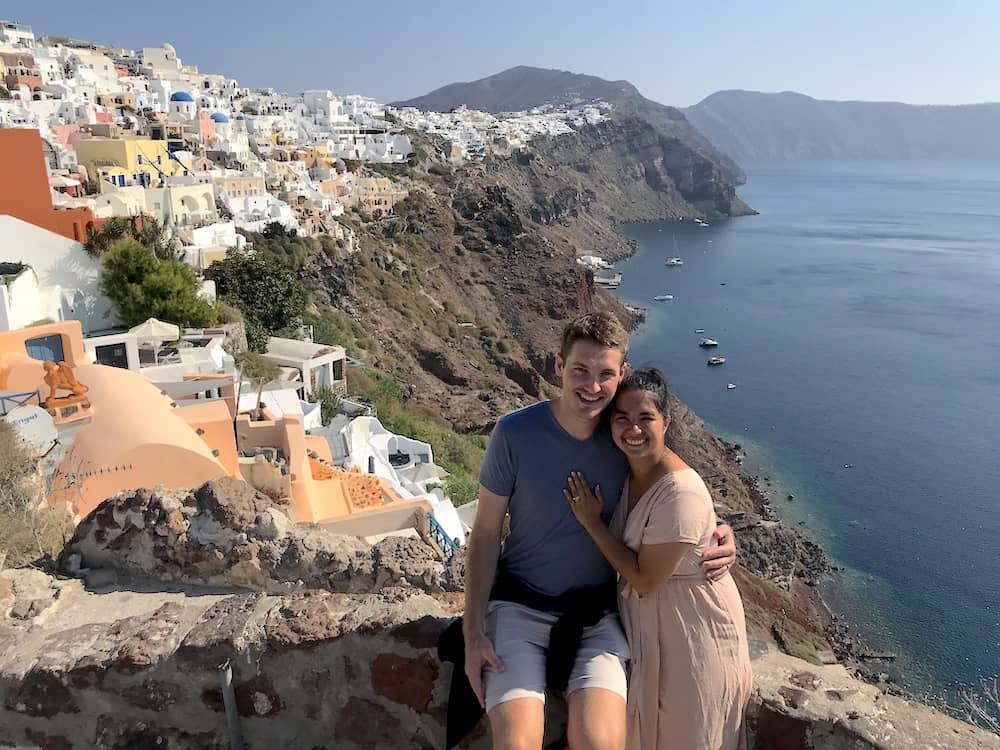 …Here are some tips we wish we knew before: 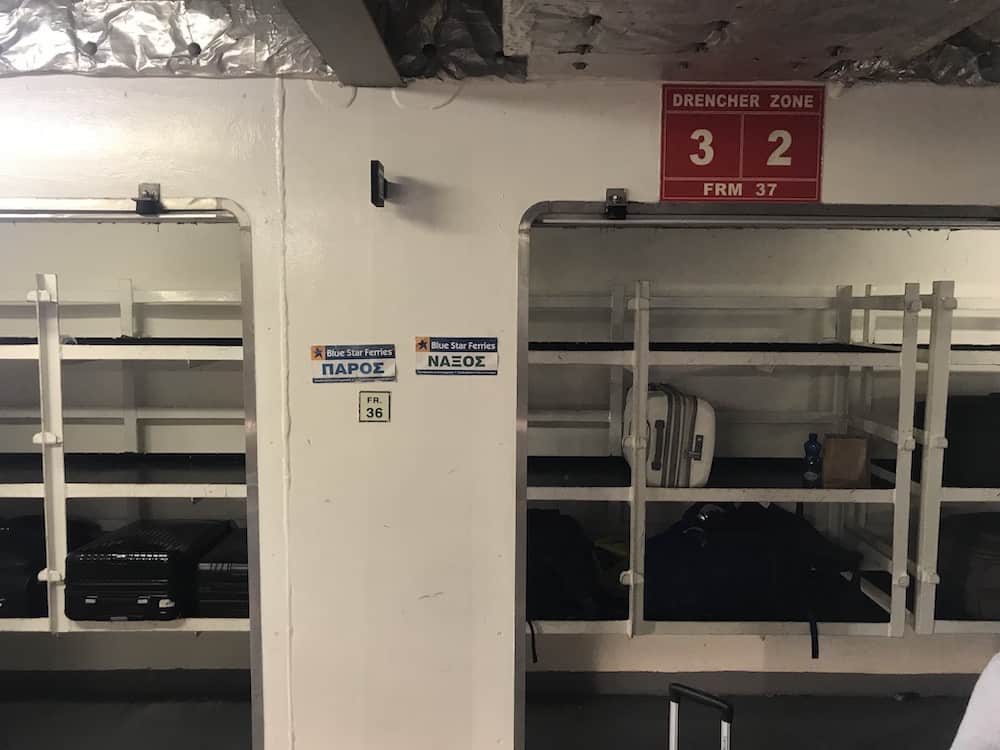 Remember: Just enjoy the ride – you’re in Greece! Don’t worry too much about how you’re going to get from Athens to Santorini and just go with the flow. Everything will sort itself out!

Is Getting From Athens To Santorini By Ferry A Good Idea?

Yes! We absolutely loved the experience because we felt like we were really in Greece.

It does take much longer than the 1-hour flight from Athens but we felt it was all part of the adventure. However, if you are crunched on time – the flight might be a better idea for you.

Otherwise, we highly recommend taking the Athens to Santorini ferry! Download your movies, books and games to pass the time.

And don’t forget to stand on the deck as you reach Santorini – the views are absolutely breathtaking! 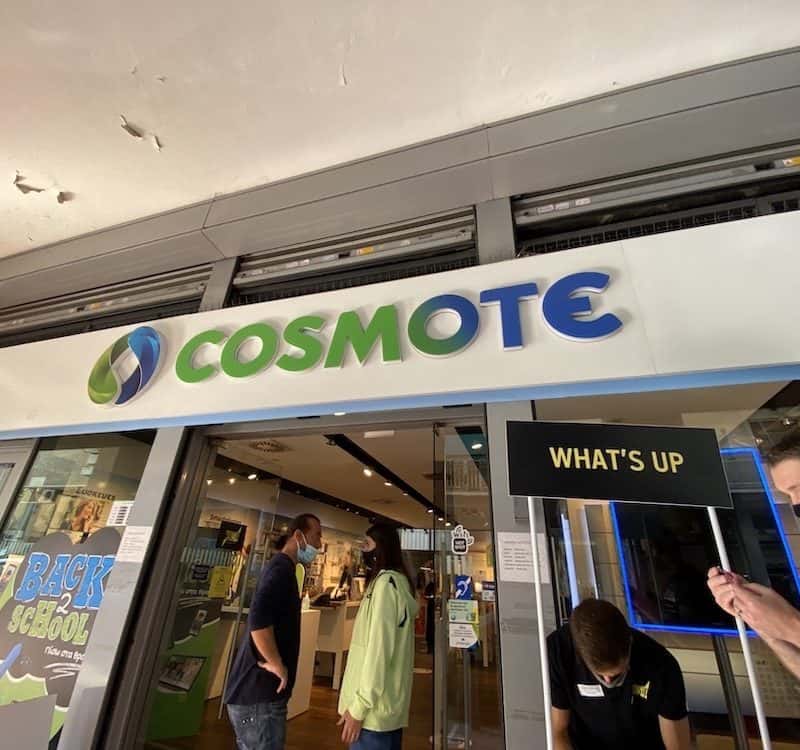 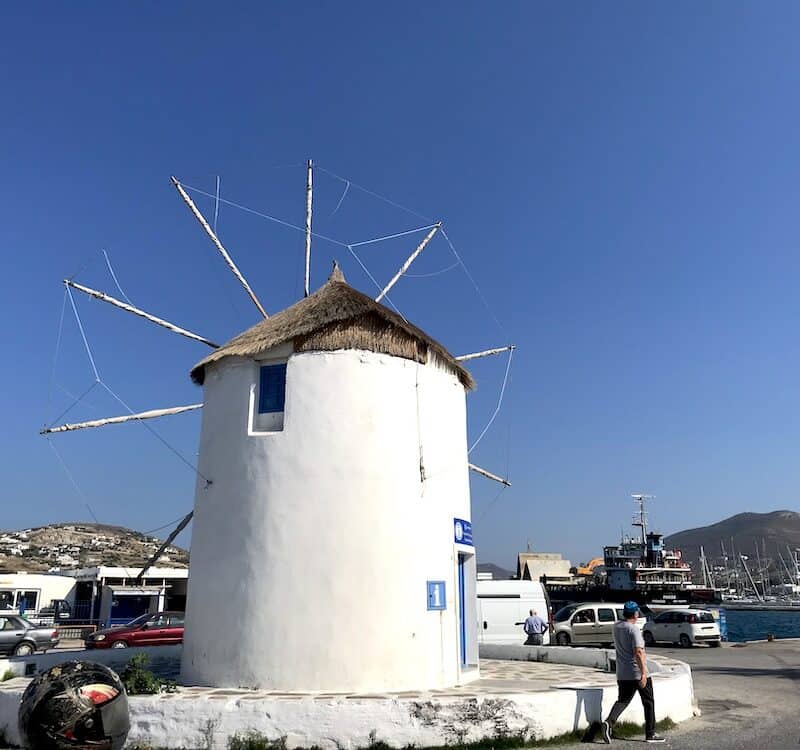 How To Get From Athens To Paros: Your Top Transport Options 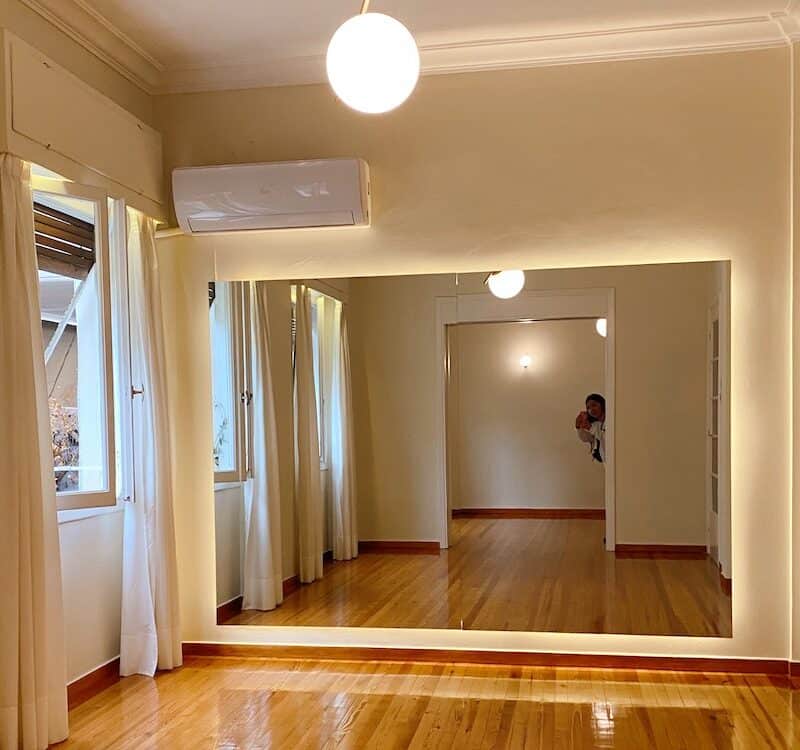 Pilates Athens Greece: The Best Studio For Your Body & Mind 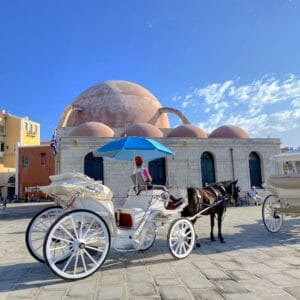 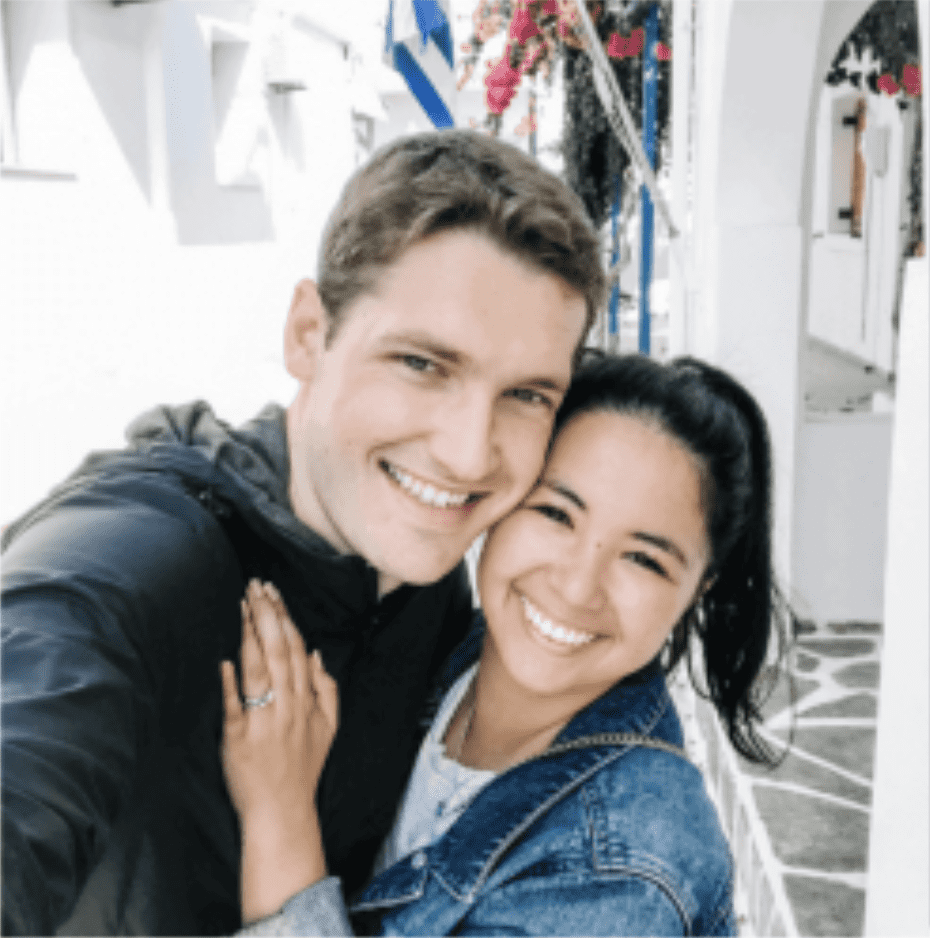